I just finished my project, written in Angular and although it runs on mobile browsers, it needs to be deployed as a native application. The choice is obvious, Ionic.

Here’s my approach integrating Ionic in my Angular project.

The easiest way to change App Icon and Splash screen in Ionic is to let Ionic handle creation of different versions of icon and splash sizes.

When an app first created, there are 2 files in resources folder, icon.png and splash.png.

Replace these 2 files with your desired icon and splash files.

Once icon.png and splash.png files have been replaced. Follow this steps:

The lifecycle of a fragment (while its activity is running). 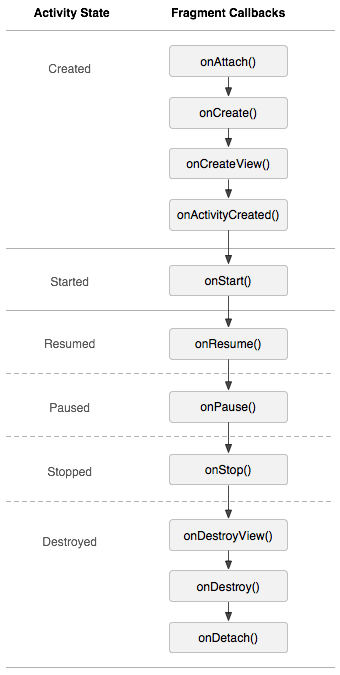 The effect of the activity lifecycle on the fragment lifecycle.

With so many tutorials, articles and resources available out there on the Internet, learning new programming language, framework and library become much more easier. However, as much as its advantage, readily available resources have also become its own problem: where should I start?

With so many options available, it can be confusing to even start learning. I present you my learning paths to solve this problem. Learning paths will guide you through learning programs for each subject of your interests. Think of this as a curriculum to the degree you want to get.

Most of the courses are from Pluralsight.com, but this learning paths are not limited to just Pluralsight.com. I also include some free courses from other sources. While I understand that you may have to pay for some of these courses, I can assure you that paying the subscription is worth it (especially Pluralsight!).

I will update this learning paths to include more subjects and courses in the future. Stay tuned!

I had a chance to toy around Android Development Tools (ADT) over the weekend and this is my personal take on it: aside from setting up Eclipse IDE, everything works painfully. Although, I have to admit, setting up Eclipse IDE for me wasn’t as painful as Jamie Murai’s experience with RIM Developer Relations, not even a slight chance.

This is what you need to do:

Run Eclipse (Mac and Windows)
Ideally, you just click on “eclipse.exe” file and you are ready to develop app in Android. This is true when I ran Eclipse on Mac OSX environment. For Windows, it’s not the case. In Windows environment, I ran into couple issues

Android Virtual Device (AVD)
Your journey is not yet ended after you get Eclipse to run. Before start coding your app, you will need to create what is called Android Virtual Device (AVD). Essentially, it’s a sandbox, closed, isolated environment of an Android device. So, think of it like a Android cell phone but running on your OS.
Android Developers site provide details information on this subject: Managing AVDs with AVD Manager.

I would strongly suggest you to run your app on actual device as oppose to emulator in AVD just because running emulator is extremely slower in my case.